skip to main | skip to sidebar

Sock Darning to the Rescue 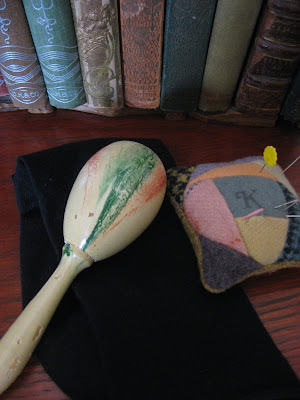 After holding my breath to pay my bills I decided to darn my socks....see a complete "how to darn" February 14, 2008 blog entry. Do you want to know how long it took to preform this task...seriously...3 minutes! These socks were not even old socks, they were maybe worn a dozen times and I probably paid $8 for them...so there you go!
Posted by froogal at 9:23 AM 1 comments 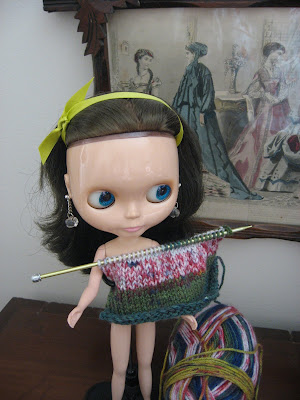 A few years ago, while living in the desert, I became obsessed with "Blythe"....obsessions were common place for me in the desert....no friends and a lot of time on my hands.

I had an Ebay customer that send me a picture of her Enid Collins handbag collection, something that we shared in common. Propped up against one of the handbags was a Blythe doll. I googled Blythe and was enthralled! To make a long story short I spend the next few months scouring the Internet for one of my own. The dolls are made in limited editions and the prices can rise high on Ebay. I managed to find one in my price range on Amazon...the only problem, (for me anyway) was that she had pink hair. I had read many articles about customizing these dolls and figured that I could make a few changes by enlisting my hairdresser Michael.

...and that is when Blythe cursed the day she ended up in New Mexico.

My hairdresser was probably my only real friend in Santa Fe and I love him dearly. We share the same offbeat sensibility so when I approached him with the idea of taking on a "vinyl diva" he was up for the challenge....it was not until later that he confessed to a pile of "skinned" Barbie dolls in the closet of his youth! (the hairdresser prodigy that he was).

Apparently when I went to pick her up he had to fish her out from under the back seat of his car...he had put her there because she had basically turned into "Chuckie" after he made a mess of the dye job...her eyelashes fell out and she was covered in black streaks! He was not quite sure how to break the news to me since I had high hopes of her becoming "The Next Top Model" for my own personal line of Blythe fashions.

....well something was lost in this whole process(but not my hairdresser). I dressed Blythe in her store bought clothes, wrapped a ribbon around her head and propped her up on my work table, sans eyelashes...and that is where she has stayed until recently when she has decided to forgive me for the "wrath of Michael"....I think I owe her a new dress.
Posted by froogal at 12:06 PM 0 comments 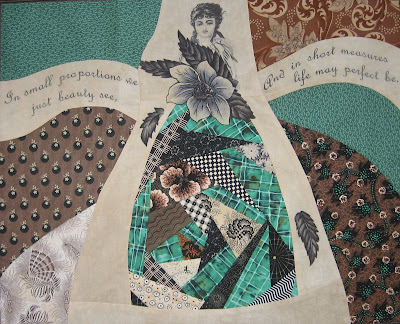 While I was putting together my patchwork monologue entry for today I thought about this quilt that I made a few years ago and drug out another dust covered box from under the bed to retrieve it. This project was part of a quilt group challenge that I participated in. The challenge for this particular piece was to use the ugly green fabric that can be seen in the skirt. I was also experimenting with other techniques like curved lines and digital printing on fabric. I am not sure how this ties in with today..."my day of days"...but it reminds me how much joy creativity has brought into my life for 57 years and even when my venue changes my innate style remains the same.

I am headed to Austin, TX today to visit my best friend Ann...YIPEE!...I'm thinkin'....margaritas, Texas barbecue, shopping...resale shopping, and some much needed "talk til ya drop" therapy!

Patchwork Monologue will be on hiatus until Tuesday when my creative juices will be flowing over.
Posted by froogal at 6:03 PM 0 comments 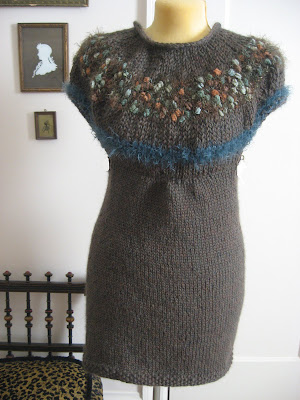 I finished my tunic sweater knit on circular needles and I am very pleased with the results! I have to admit I was "winging it"...sort of a "design as you go" project. I used 2 different patterns as a jumping off point, one for the top and one for the bottom. I have knit handbags in the round before but this is the first time that I have knit a sweater. Circular knitting is great for the "knitting while you do something else" projects, also there are no seams to finish so when you are done, you are pretty much done and that is always exciting!

I have a set of Denise Circular knitting needles that have inter-changeable tips and ends so when I finished the bottom I just snapped the needles off and put the plugs on the ends to hold my stitches. I worked the top pretty much "free style". I found a pattern for a top down knit vest and used that as a guide for how many stitches to cast on. I had to work out my pattern so that I would end up with the same amount of stitches left on my top needles as I had left on the bottom stitch holders. I transferred the stitches to straight needles

I joined the top and bottom with a "three needle bind off". I had used this stitch before when I was making handbags and thought it was so cleaver I wondered why you don't see it used more often.

To do a three needle bind off you hold the needles with the 2 pieces that you are joining side by side in your left hand then using a third needle you place the tip through the first stitch on each needle as if you were knitting one stitch only you knit the 2 together as one. You knit a second stitch, the same way as you would for a regular bind off and then put the first stitch over the second and proceed with the remaining stitches.

Using this method leaves a beautiful smooth seam front and back!
Posted by froogal at 8:51 AM 1 comments 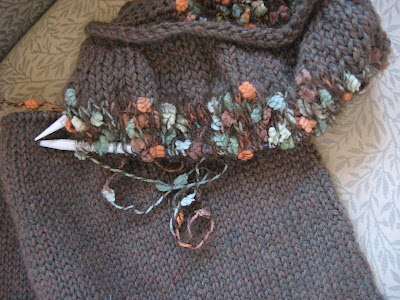 I have started the "top down" loose turtleneck for my tunic. This yarn knits up real fast on size 13 needles. It really flows and those little felted leaves just pop right through. I think I will just knit until I run out of yarn, in ever increasing rows, and then see what happens next!..I love this kind of knitting..... I am thinking just one odd stripe and then more of the alpaca before I join the top and bottom.
Posted by froogal at 4:50 PM 2 comments 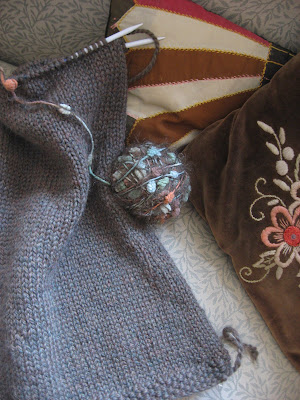 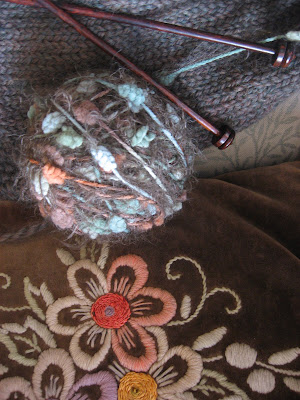 I started this tunic vest on New Years day. I saw this knit sleeveless tunic in a shop in Sutton's Bay, Michigan last summer. I have a picture of it on my Blackberry but have not been able to download my pictures with any success but I will keep trying. It had this nice big soft turtleneck that was slouchy and knitted with an interesting variegated yarn. The bottom was slightly flared. I found a pattern that was close to the same shape and I used that to knit the bottom on circular needles. I am using "Misti Alpaca Baby Chunky" yarn. I am close to the armpits and have decided to start the turtleneck on different needles and work from the top down. I have a really interesting idea for joining the top and bottom so we will see how that goes and I will post my results. I am going to work in this really cool novelty yarn that I bought in Venice, Italy 4 years ago...as you can see the colors are perfect together!! YEAH!
Posted by froogal at 2:35 PM 1 comments 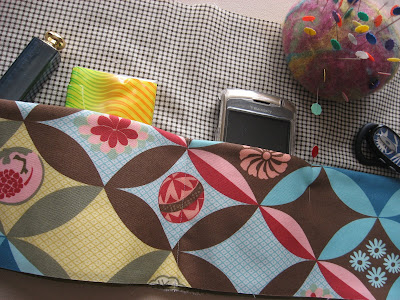 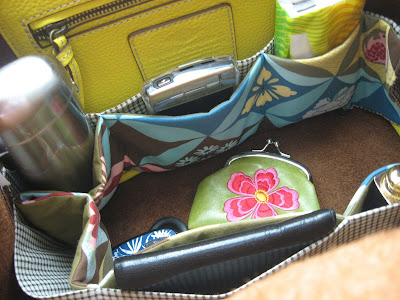 How to make the purse organizer:

*Layer the two contrasting fabrics and right sides together and the quilt batting on the bottom.
*Stitch 1/4" along one edge.
*Press seam towards batting. Fold in half and press.
*Trim 1/4" off the raw edge of batting.
*Place layered piece on top of the 29X9 piece of fabric.
*Measure the areas you want to divide for the items that you carry in your purse and mark with pins. Make sure to give a little ease so that your items will fit in comfortably and stitch through all layers to create pockets. Back stitch at top to reinforce.
*On one end turn the batting filled piece under 1/4" and stitch through all layers.
*Fold larger backing fabric over and line up raw edges.
*Stitch 1/4" along edge and along the end that was not folded under.
*Turn right side out and slide in the 2 pieces of plastic template.
* Turn in 1/4" on raw end and stitch closed.